I think it’s obligatory to say something corny and Elivis-ish when talking about the race. Just look here and here, of course it helps if you actually are Elvis like this.

The original idea was to do the Santa Run on Dec 1 then the Marathon on Dec 2, but plans fell through as I was still feeling a little down from the cold and was a little nervous about running and then running and how the body would take it. So at the last minute, I decided to leave the Santa to others.

Me and the Missus got up nice and early and slowly made our way down to the Mandalay bay. We meet up with a few people from my work that I conned; begged and bribed to do the Half with me (actually these people are awesome! They have never done any event let alone a half marathon, yet with two months of training and constant encouragement, here they are and they did GREAT. They successfully walked the entire thing in just over 4 hours. These guys are inspiring. To all those people who think that a marathon is impossible, these guys show you just what you can do if you put your mind to it. Congrats to them). 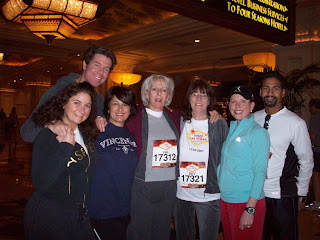 We took a group picture or two and meandered down to the race. We got there right before the race started and was able to watch the sun coming over the mountains. Take a look at this pic, isn’t the Vegas backdrop gorgeous? 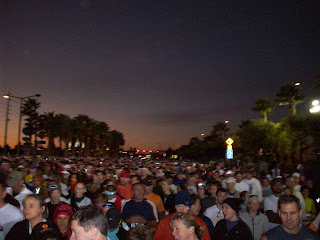 Once the gun went off, we (the entire 17,000) started moving forward. About 11 minutes later we were finally at the start line! And Bang! We were off like a rocket! Well, not really, but we were off, all without saying goodbye to the group (who would be walking). GOOD – BYE!

First couple miles were done before we knew it and we were ahead of our normal pace. Unfortunately our heart rate was ahead too.

I think that we passed the blue man group right around mile 4-5 and decided to stop for some water breaks.

Man! Those volunteers have an unsung job. Nothing like handing water off to a bunch of runners who have two brain cells working and inevitably spill water all over the place. Then there’s nothing like cleaning up all those cups of half drank water up off the road.

Right at mile 4.75, I remember that I had last year’s course on my watch (from Garmin website). I had meant to run against it at the start but forgot. Now seemed like a good time.

Warning! If you think that you should “do” a course midway through your run…DON’T!! Because when you do, it will terminate the run you are already on and make a new one for you! Nice!

Now I’m trying to do the mental math of trying to remember my previous time and then add the new time to get the total time and the same for distance. Have you ever seen me do math?? It’s not a pretty sight!

Every time my honey asked how long until the mile is done, I screw my face up, a small vein would pop up on my forehead, a few seconds later, the vein would grow, turn purple. Just about when my head would explode, I would figure out the answer…only to realize that we just passed the mile marker. Uugghh!

Surprisingly, the entire race wasn’t that bad. The Elvi were fun; the run through wedding chapel was great, the people pushing strollers with TWO babies in it AND passing me always blew my mind.
I think that the best was when several Elvi decided to stop into 7-11 to grab an eighteen pack of Milwaukee’s best. Sadly, I was envious.
Miles 10 and 11 were the hardest for us. Probably because on our long runs prior to this, we had only gotten to 10 miles, following the training philosophy, that if you can do 10, you can do 13.

It may be true, but it’s stupid. The body doesn’t like doing more than it’s been trained to do. The last 3 were not happy. Next time, go over the distance, say 15-16.

We finished the race in 2:42:42. Which is good. Not too fast; not too slow. It beats my previous Half by 6 minutes! So I’m happy with my performance. I’m REALLY happy with my honey’s performance!

This was her first Half and she came through with flying colors. No injuries, no complaints, no tears and no worries. In truth, she was in better shape than I was. My IT band was acting up something fierce (on my good leg nonetheless!). I can’t say enough how proud I am of her.

She’s already talking about next time!

Afterwards, we waited around until the rest of the group came through and then we all got some race swag and grub and headed home.

Well, they did. We went to Macaroni Grill and had a beer or two with the family, then went home.

Sometime about 3pm, my IT band declared it was staging a revolt and woke me out a very deep sleep. After appeasing the revolution with loads of ice, we went for a small walk to flush the legs and then went out again for some late night dinner. 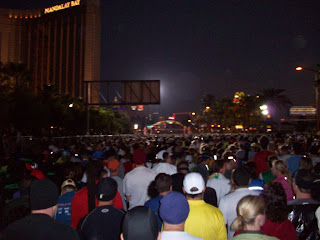 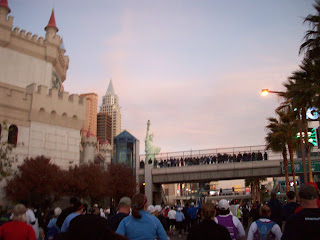 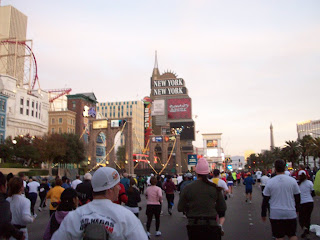 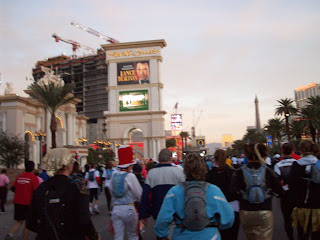 Nice report, nice PR! The weight thing, I'm always heavier after a race but my body sucks too with regard to eratic weight.

Any race where you (or your honey) come away talking about next time is a good race.

Ha! Sweet Baboo, if my weight was 'erratic' as yours, I'd be down to super skinny in no time! Keep up the good work.