TODAY I BECAME A TRIATHLETE!

Before I get into the nitty gritty details of the race I would like to share some background info. I was one of the unfortunate people that never learned to swim. In fact, for 34 years I have basically hated water. I hate having it on my face, I hate being over my head, I hate being in a lake, you get my point. (I blame it on being a Leo…cat’s hate water :-D). I have a very healthy fear and anxiety over water. Not really sure where it came from because I have no traumatizing almost drowned as a kid story but nonetheless, it’s there. Anyway, when my honey started doing tri’s I thought it was really cool and wishfully always wanted to do one also, but no way no how because I HATE WATER.

Then this past January, I finally decided to grow up and not let a fear get the best of me without actually trying to overcome it. So we bought the Total Immersion Happy Laps DVD and my journey began. BTW, a fantastic DVD for anyone that has a fear of swimming and water. We spent a lot of time in the pool allowing me to just become comfortable in the water and under the water. From there I progressed to my first tentative lap to finally swimming multiple laps!!

I decided to sign up for the Iron Girl Tri and started training. It was all going great until it was time to swim in open water. Needless to say, my first few attempts were horrible. Every time I made it about 50 feet from shore, I had a panic attack. Hyperventilating, crying you name it. Well crap, this is not good with the tri only being a few weeks away. I was discouraged but nothing I tried stopped the panic. Luckily (and this is the only time I’ll ever say that) I injured my hip flexor and could barely walk. I took this as a sign and an easy way out and did not do the tri.

Then, about a week after that I signed up with a coach training newbies for the Disneyland race and in the next 8 weeks managed to calm down that panic and start swimming in the lake. And that brings us to…

Packet pickup
We get to the hotel and holy cow, there are so many people in lines to get their packets. Women of all ages, sizes and shapes everywhere. If you didn’t know, this is a women’s only event that caters to 1st timers. We attend a speech by Sally Edwards who is the race’s spoke person. She is so funny and entertaining. She said two things that really grabbed my attention. 1st, anyone can do a triathlon! Look around at all the women here that are showing you that it’s possible. And that we have a goal to recruit one more lady for next years race and prove to her that she can do the impossible. Then she told us our mantra for the whole race was “I am a fabulous swimmer, biker, runner.” Then she made us get up and pretend to swim and repeat I am a fabulous swimmer over and over. Then without warning, I am crying. Actually, just writing this makes me cry. I am doing my impossible…swimming!

Oh, and I find out that the water temp is around 78-80 instead of the mid sixties that we thought. Most of the racers opted not to wear a wet suit at that point. But I needed my safety blanket! We are up at 4:15 am to be at transition around 5. They want swimmers lined up by 5:40 for a 6am start. This is very, very early! I struggle to eat something, and Izaac and I are off to transition which is just across the road. Bike racks are assigned by numbers and mine is 3rd from the bike in/out. Great!! I get everything laid out, go potty and get ready to swim. I am calmer than I expected. Hmm…

THE SWIM
The swim is in California Adventures Lagoon which is man made. The start is “back stage” as they call it. The swimmers all went behind this big door and the spectators went to a viewing area. Bye Bye honey!! From that point on, it was nothing that I thought or had practiced. There is no warm-up allowed. WHAT!!?? Basically they call you up in your wave of about 100. You go down this boat ramp for about 30-40 feet and you hop in and start swimming. The course is in, what felt like a very narrow, clockwise direction around the outer edge of the lagoon. The thing is, you can't see the water until you’re called up, then you have about 3 minutes to assess the situation. I never got to see the course until I got in the water! The main problem I had was there wasn’t enough space. We were crammed in about 7-8 across and 10 deep and when it was time to go it was just swimmer after swimmer entering the water. 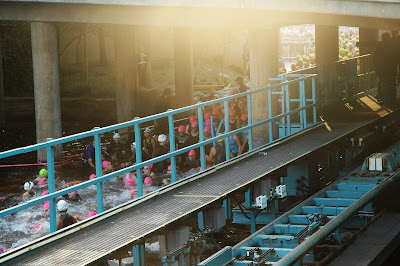 This lead to a lot of congestion in the water. There were bodies and people everywhere. I have never been rubbed or touched more in my life and this never eased up during the entire race. Every time I tried to actually swim face down, after 5-6 strokes I ran in to someone. WTF! I have no idea how to swim like this and the panic started to creep in. Then the wave behind me is off and already catching up. Great, another 100 girls to try to swim through. I finally found a swim angel and just relaxed on my back for a few. Then off I went. I’d swim a little, doggie paddle my way around people, float on my back till I get hit, then repeat until I was finally done! There was no rhythm, no mantra, nothing. It was a blur. The one image that stands out is at one point I’m looking around at all the heads in the water and about 5 or six women hanging on a surfboard looking panicked and I felt like we were straight out of the scene in Titanic when the boat sinks! So the end of the swim was no less congested than the start. You had to swim up to the boat ramp and get yanked out of the water. Problem is they were only taking about 2 people out at a time so I felt a little trapped. But I DID IT!!

Very, very slowly. No laughing or wincing at my time… 18:43 (.3 miles). Ouch! But it is actually exactly what I predicted. I can only get better!

And the water was hot! I was hot. It was also very brown. You couldn’t see anything. They say they put coloring in it to make it look like a real lagoon. Hmm? 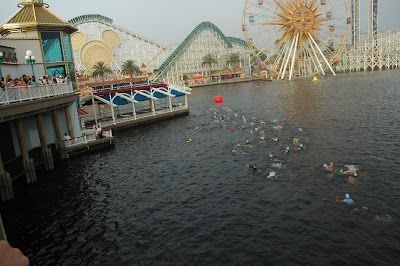 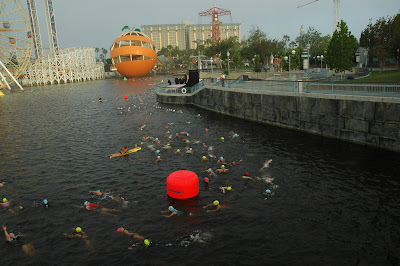 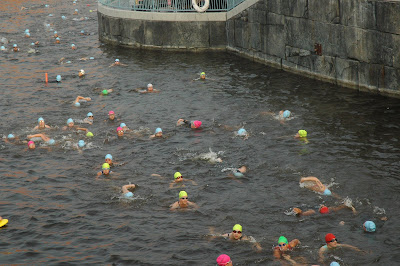 We have to run .23 miles to transition (almost as long as I just swam!)
T1 4:05. With the distance and getting my wetsuit off and saying hi to Izaac ;-)

THE BIKE
By far the best experience of the race. I felt like the racehorses must feel right before the Kentucky Derby starts. I was just ready to ride and ride fast. It was probably all the adrenaline and frustration from the swim. It was flat 5 mile loop done 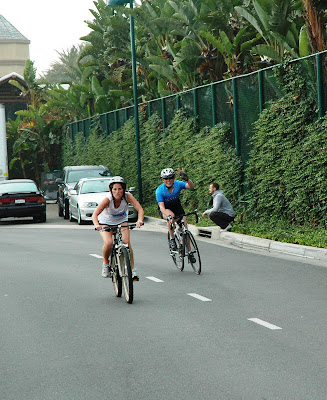 twice (turns out to be closer to 11 miles). They had the streets shut down with traffic cops everywhere. It was awesome. We had 2-4 lanes to ride in. Turns out, most people didn’t know the “rules”. Everyone was everywhere, all over the place. There was no riding to the right unless passing, no single file. These girls took up all of the road. So again, it was trying to pick your way through the crowd. And yell on your left a lot. Although not many listened. Basically if you were faster, you just weaved your way through people. I didn’t get frustrated though. It is a beginner race, and they were trying. I had just acted the same way in the swim :-D
Bike time: 33:26 (17.9mph) WOO! HOO! (I like flat! I had never ridden on a flat course before, it sure improves your time)
THE RUN
Transition time: 1:36. Not bad. We ran through California Adventure both behind the scenes and in the common areas. No spectators were allowed but there were a lot of employees out cheering us on. Again, it was very much a blur. Just weaving around the park until we pass around the lagoon we swam in, around the corner and there is the finish shoot!!
Time: 20:07 (2 miles very flat except a slight uphill at the end)

THE FINISH
There were so many people yelling and shouting. I was so excited. I did it! Interestingly enough, no tears from me (Izaac may have shed a few!) I just had the biggest smile in the world. Today I became a triathlete :-D 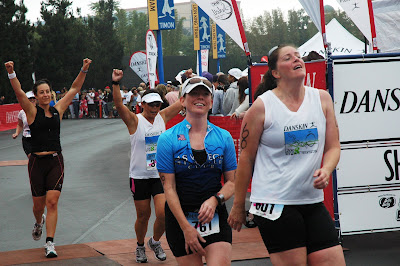 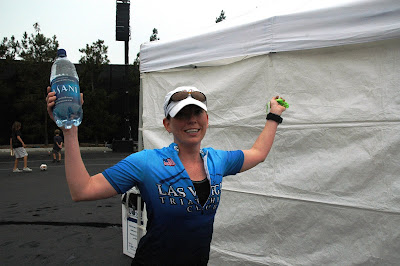 I owe so much to Izaac. Thank you for believing in me constantly, even when I doubted myself. Your confidence in me is amazing. I love you! 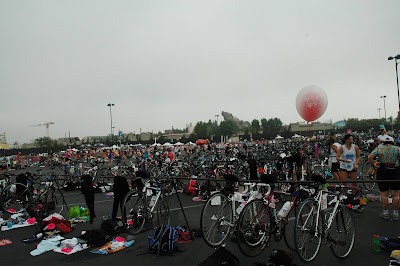 Izaac was right it's a tear jerker.

I think that crowded swim would have unnerved me too but you got it done and that's all that counts!

Then you killed the bike and the run. Way to go girl -- two awesome strengths there. WOOT!

I'm a leo too. And even though I love the water and always have (mutant leo?) I would have been freaked out too with that many swimmers.

I would have been even MORE freaked out with that many unpredictable riders around me - but look at your time!! And your run! Dang! Your smile says it all. (I believe the traditional triathlon response to a first race smile like that is, "Welcome to the crackhouse.")

Can't wait for the next RR!

Nice job Mrs!!!! Way to rock that bike even though you were dodging and weaving...

I thought I felt the triathlon heavens open up and accept a new member.

Warning! You'll never be the same.


To Form on how I found out: let's just say that the pharmacist at Walgreens was quite shocked when the Patient was shown.

Awesome job! Way to conquer your fears and triumph!

You are a triathlete!

You did awesome...I think in all three areas. That's a great OW swim, and a speedy bike and run time.

Danskin triathlons are so friendly and supportive.

Revel in your wonderful accomplishment, triathlete!