Well…not really a RR. It turns out that Danskin is a girls women only event.

It also turns out that despite my man boobs, they wouldn’t let me in!

That’s right; the MRS. did her first triathlon.

Now you’ll get to read her RR in the next post but in the meantime, I’ll give you a spectator’s RR.

A lot of women!!! Holy cow! I think that originally there was something close to 1600 women signed up for the event, it sold out two months in advance and the hotel package was full three months in advance.

Moral of the story: if you’re going to do the event sign up early, because Danskin events are hot commodities.

Now speaking from a spectators view is something totally different for me. This is the first event I have ever spectated at! I’ve never actually seen an adult triathlon from start to finish. I’ve done ‘em but never seen ‘em.

And I don’t think that Danskin should count as my first. The organization of these events are huge! They are very well organized events and everything is taken care of. They have a HUGE expo area; lots of different lines spread throughout so there is no crowding; they spread the vendors throughout the venue so there is no cross competition of vendors.

Each Vendor you visit knew that you were there for them and not the next guys so they spent more individualized time with each customer. And with so many people the vendors were busy! It took me a few minutes just to flag the sales people down. No high pressure here, I practically had to be them to take my money.

During the expo, they have two meetings conducted twice. One session in the morning and one session in the afternoon. Each session consisted of an overview of the course and also a welcome speech by Sally Edwards.

Sally is a funny gal! She’s done 15+ ironman’s and while older she is full of spirit and comedy. She really knew how to speak the women. She instantly got on their good sides and spoke right to their hearts about their fears and their worries. I think that she put a lot of people at ease.

Her presentation was very funny and she had everyone laughing at all her silly reenactments of past race mistakes.

Her end goal was to relieve the woman and to teach them the rules. I think that she did a great job at both. And when she spoke, the girls listened. She recommended a certain goggles and they sold like hot cakes.

Later in the session they had a girl come out and talk about clothing. BORING! I blanked out and thought nobody would be listening. WRONG! I looked around and all the girls were rapt. I think I even saw some taking notes!

Apparently I don’t know the women psyche at ALL!

On Race day, the venue was out on the Disneyland parking lot. There was a huge collection of ‘A’ frame bike rack but each row was really spaced out so it was nice without any claustrophobic feeling.

Really makes me wonder about my tri’s. I never realized how clustered we all were. Everyone stepping on everyone. This race was nice and spread out. Very relaxed environment.

That’s not to say that the women were taking it easy. Most everybody was there to race. This wasn’t a ‘take all day, smell the flowers’ race and the women brought their game faces with them. I even saw a couple of disk wheels out there. 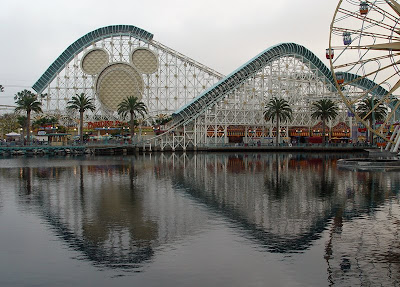 The athletes swam around in the California lagoon. It looked gross from up above but, come on this is Disneyland, nothing there is gross. They said that the water was dyed brown to give the illusion of a true lagoon (are there REAL lagoon’s in California??). I was skeptical at first, but when you looked around you noticed that there was no trash anywhere in the water. In fact, it Disneyland! There is no trash anywhere!

The bike went through the streets of Anaheim and I’m told they block off the entire road (not just the one lane they do for my triathlon)! Must be nice!

The run was through California Park itself, but they blocked off people (so there was no sneaking into the park for free! DAMN!). But we got to see everybody running down the finishing shoot and the announcer did his best to keep up with all the athletes’ names.

The other nice thing about this race was the proximity to the hotel. They have you staying right next to the venue so when the race was done, we still had 3 hours to shower, nap and rest before check out time! Talk about nice!
Definitely a nice race
I realized that I’ve lived in this sheltered world of Vegas and the variety of tri’s it holds. I’m curious to see how other cities tri’s are?

The Mrs’ real RR is coming up! Let me give you a little warming; bring a box of Kleenex!
at 3:17 PM

I have to restrain myself from buying every cute piece of athletic clothing from either a catalog, expo or store. Rapt attention must be paid!

Not to be a beyotch or anything but when is the Mrs. report going to be up.

Reading your report just made me want to read it all the more. Please ask (tell) her to hurry.

You were a sherpa newbie! I can't wait to read the RR! I adore Sally Edwards. She could have rested on her laurels as one of the pioneers in this sport but she has kept in it bringing thousands and thousands of women into it. I have her book for women and it is in TATTERS. Someday I'll have to do a Danskin tri to get to see her in person! Glad you had such a good time.

Oh...I love the Danskin series of triathlons! The Denver Danskin was my first and favorite tri ever!

Sally Edwards is a hoot, too...she is very inspirational and funny.

Congrats to your wife!!