I’m going to die out here!

That’s the only thought going through my head as I feel my arms transform from Greek godlike arms to pylons of cement.

I can’t swim another length and there’s no kayak anywhere near me.

I’m going to die out here! Four months of training, four months of working harder than I’ve ever trained before and this is what it comes down to. Me bobbing uselessly out in the middle of the lake.

That was the moment I decided that I need a new wetsuit. There’s got to be a reason why I can swim for an hour nonstop in the pool, but it’s only been 5 minutes and I’m dying. Or it could be the nerves or the fact that I suck or…but I’m going to go with the wetsuit.


“Racing anything is always a disproportionate investment. The time you spend training is tenfold the amount of time you actually race, but you accept that as part of the game.” – Bob Mina


This is it. The last 4 months of training have been for this. Sure, it’s REALLY so that I can continue and grow and race some more but this is my RACE, the one that started it all, the one that will end it all.

Maybe it’s a mental defense, a self-protection mechanism to shelter me from the nerves and the chaos it brings with it.

Whatever it is it works (almost). Come race day I’m ready, I'm nervous but I haven’t crapped myself and nothing went into the toilet that shouldn’t have so I am already ahead of the game!

Watching the Half people go off before me is awe-inspiring. Or nerve racking. Either way. 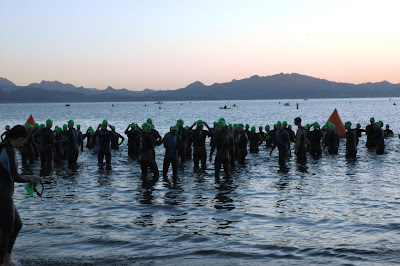 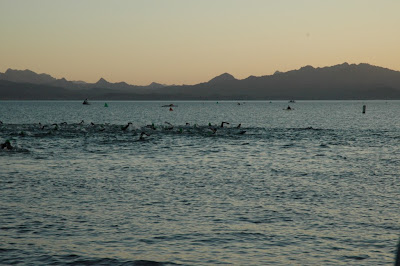 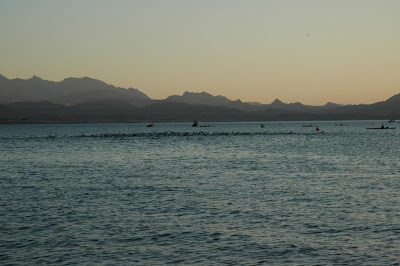 As I watch them go off, I see how far they have to swim compared to my measly Sprint distance, Thank God! About this time, I also realize how long the transition is. 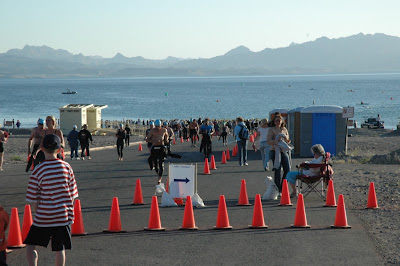 HOLY COW! The RD was trying to prove a point, something about how low the Lakes gotten over the years and how much damage we’re doing to the world with every breath we take. OK. I got it! The transition was at the water’s edge back in 2002, but now its 500 feet away. OK. But can you tell me why the transition is another 400 feet long! It’s like high school track all again, but this time do it with while pushing a bike. 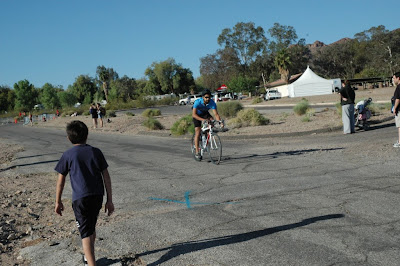 Coming back from the bike was just as bad. Coming down hill with bike shoes, you don’t know whether you should run and make this a fast transition or walk and conserve energy for the run. You end up somewhere in the middle. Trotting along. This coincidentally goes along perfectly with your bike shoes (clop; clop; clop).


As I start the run and head out into the desert, I run across Stef who just finished her swim. She’s looking great and fully ready to take on her bike.


She gave me a boost of energy, which the desert immediately sucked right out of me. Trudging through the desert is always an experience. An experience in slow suffering. Somehow, running over rocks no bigger than a marble, sucks out the energy the same way as climbing over rocks the size of buildings. Both leave you tired and relieved that it’s over, but it this case all it means is that you’ve run one mile. There are 2.1 more to go!


Finally when I found my legs, I was able to catch 1-2 people in my age group but there were two people that were just outside of my grasp and I could tell by their form that if I sprinted, they’d match me. With that knowledge I cruised in for and easy finish. 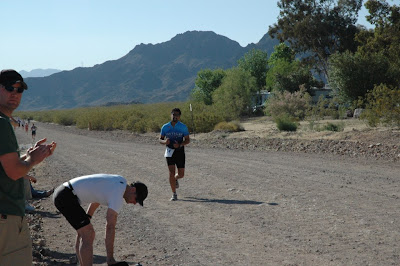 That’s about 30 min faster than my first RAGE. But that was the time I swam head up; used a mountain bike; and ran on an injured leg.

So….What did I learn?

· Get a better wetsuit
· Swim more
· Run Faster (if I had run my last mile pace for the entire run then I would have finished 3 minutes faster and moved up 5 slots for my age group- Although I would still have been NO WHERE near winning!)

I had a great day after the race. Hung out at the race the whole day and saw Stef come in from the bike, saw Baboo and friends coming off the bike, and watched as JohnnyTri flew by me on the bike towards the run. Was even briefly able to run with JT and SWTriGal as they started their runs. As an added bonus, watched Stef come in for her finish and hang out with her right after her finish.

The second best part…hanging out with the Outlaws and JT after the Race. We ate some good food and enjoyed even better company.

Another cool thing: My friend Steve, won the raffle! It was his first Tri and he did the whole mountain bike thing. Now he won this awesome FELT tri bike! How cool is that? Man, I’m jealous!

From what Baboo says, this course was TOUGH. Like real tough. Like tougher than Buffalo Springs. (Check out their intro, it’s sweet!)

It’s nice to hear! It’s nice to know that if you can do well on this race and Silverman you can pretty much tackle anything.

It’s nice to know that Las Vegas has some of the hardest races around.


That means that this should be no problem!

Oh yeah, Florida 70.3 will be a snoozer by comparison.

Can't wait to see the pics!

I too think it's cool that Las Vegas has some of the toughest races around, right in our backyard!! I read JT's and SW Trigirl's reports and WOW. I bow down to them.

Thanks so much for staying out there and cheering for me! You had a great race out there!

Almost time for the SG Tri can ya believe it!

THAT was a great race! I couldnt' remember how you did since I was in a post race haze at the dinner. Thank you and beleive me ANY 70.3 will be easier than Rage..
Also come to Elephant Man in September..

Nice recap!!
and your totally ready for the Olympic!!

Nice job of not dying during the swim.

It is hard to finish when you are dead!

Great job out there. I'm glad you didn't die on the swim. Training out where you do, you won't find any races harder than that. Can't wait to read about you tearing it up in your olympic and 70.3. It was nice meeting you, and thanks for setting up the dinners.

Congratulations on your result. One tip on the wetsuit, I found is make sure it is on properly. The first time I raced in my wetsuit I didn't put it on properly and my arms ached after only a few minutes of racing. I found out that I had not pulled the suit up high enough and it was too tight on my shoulders.

Thanks for stopping by my humble little blog.

It sounded like you were recaping my first open water swim. You are absolutely right...get the wetsuit. It makes all the difference in the world.

swtrigal - I like the idea of Elephant man. Are the Outlaws doing it?

Tim - Good point! I'm going to take another try this weekend and see if I had it misadjusted.

Borsch - You're still going to rock on that Du!

Great job!! That sounds like a really hard course!

The pictures are awesome...makes me miss Las Vegas.